You are here: Home1 / Airports in Iran2 / Mashhad International Airport

Mashhad is one of the big and holy cities of Iran. This city is the capital of Razavi Khorasan province and its area is about 204 square kilometers and about 1050 meters above sea level. The city of Mashhad is one million years old, that is, from pre-Islamic times until now, and this city was also the center of the caliphate of the rulers of the Umayyad, Abbasid, Safavid, Qajar and Pahlavi periods.

The old name of this city was Senabad Nughan, but after the martyrdom of Imam Reza (AS), its name was changed to Mashhad Al-Reza (the word Mashhad means place of martyrdom). In terms of population in 1335, with 241,989 people, it is known as the fourth most populous city in Iran, in 1345 as the third most populous city, in 1355 as the second most populous city in Iran. In terms of climate, this city has hot and dry summers and cold and dry winters. In the holy city of Mashhad, the holy shrine of Imam Reza (AS) is located, and more than 20 million pilgrims come to this city every year. Almost 90% of foreign tourists visit this holy city when they travel to Iran.

In addition to being a pilgrimage city, Mashhad is also a place for traveling to South Khorasan, Afghanistan, and Turkmenistan, and has a railway station, three passenger terminals, and Shahid Hasheminejad International Airport.

The construction of Mashhad airport dates back to 1330, when an airport of the same name (Mashhad airport) was operated in the place of the current pilgrimage center, and in 1346, a new concrete runway and an air force defense base were added to it.

At first, there was one DC3 flight per day on the Tehran-Mashhad route, and training flights, air taxis, and military flights were conducted at this airport, but with the increase in flights and the arrival of DC8, Boeing 707, 727, and 737 aircraft, and Airbus in 1957, parking, terminal The new airport, the flight control tower and the side buildings of the new airport were incompletely operated. But the liquidation of the contractor company caused the process of airport reconstruction to be postponed until after the revolution, and after the revolution, the airport resumed its activities, and after the end of the war, its name was changed to Mashhad Shahid Hashminejad Airport.

Shahid Hashminejad Mashhad International Airport is located on a land of 540 hectares in the southeast of Mashhad city at an altitude of 950 meters above the ground. This airport, which is a public-military airport, has two asphalt runways, each 3.925 and 3.811 meters long.

Mashhad International Airport is also the second busiest airport in Iran after Mehrabad Airport and above Imam Khomeini International Airport, and it ranks first in terms of the number of daily incoming and outgoing flights. According to the surveys, more than 14 domestic and 16 foreign companies fly to Mashhad International Airport, and 8 million domestic and foreign passengers move through this airport every year. Mashhad Airport has the first multi-storey airport parking in Iran with a capacity of more than 1000 cars and It is also possible to rent a car inside and outside of Iran, and in 1994, it was connected to Line 1 of the Mashhad subway.

The largest and most equipped Mashhad aviation center is Mashhad Airport Science, Techniques and Aviation Services Training Center. This center has been responsible for the training of disciplines such as piloting, aircraft maintenance, dispatch, avionics, and hospitality, and has several training aircraft for pilot students and a large and well-equipped hangar for maintenance students. 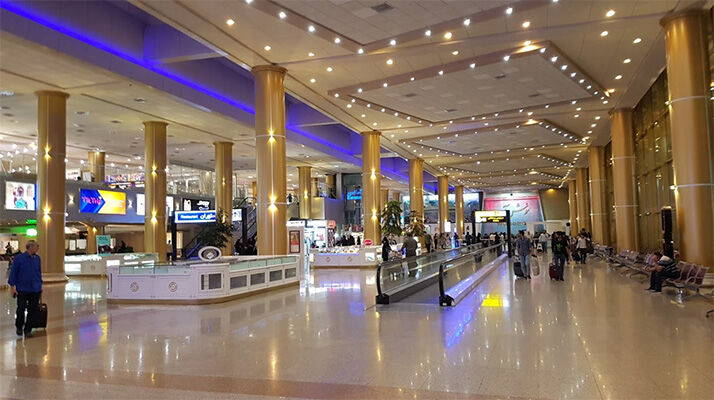 Terminal No. 1, which is for domestic flights, is built on an area of ​​38,000 square meters. The entrance of domestic flights is on the east side, and baggage acceptance, boarding passes, and boarding are done on the west side of this terminal.

This terminal is for the departure of foreign flights and has an area of ​​more than 21 thousand square meters.

There are facilities for passengers in all three terminals of the airport. Among these facilities, the following can be mentioned:

Mashhad Shahid Hashminejad Airport is located in Panzdeh Khordad Square, at the end of the Islamic Republic Blvd. The distance of this airport from each of the important places of the city is as follows: